Sifu Frank's martial arts training began officially in October 1990 but his fascination started many years prior.  Growing up in City Heights in San Diego, there was an old movie theatre where the current Nhu Y Restaurant stands now that played many Shaw Brother Kung Fu movies on the weekends.  Because his family did not have a lot of extra money, Sifu was not able to begin any formal lessons. This changed when he found out his high school counselor, Mr. George Berriochoa,  was a Tang Soo Do Black Belt instructor at Kenyon's Tang Soo Do. Sifu Frank was very fond of "Mr. B." and credits Mr. B.  for shaping how Sifu Frank teaches and treats his students to this day.  Sifu Frank  achieved success on and off the mat under Mr. B's tutelage but  his desire to pursue a Chinese martial art was too great.

After high school in 1994, Sifu cross trained with and against other styles and finally settled on learning Choy Li Fut and Yang Tai Chi at White Dragon in 1997. There, he had a great education on Chinese martial arts and how to run a business. He met many great friends that he still keeps in touch with now. After 4 strong years, a lot of medals, and  achieving the fastest black sash (at that time), Sifu's time at White Dragon ended in September 2001 after he came to the conclusion that White Dragon was not what he was looking for. Because of Sifu's difference of opinion with management, he, too, was not what White Dragon was looking for which lead to the parting of the ways. Sifu does not regret leaving White Dragon but does regret how things ended.

After exiting White Dragon, Sifu gave up martial arts for a year until he got the itch to train again. He cross trained with other styles again while trying to keep up on the Choy Li Fut and Yang Tai Chi he had learned. In his return to martial arts, Sifu realized quickly that he was not a very good fighter nor was he prepared to fight other styles.  He knew he loved Choy Li Fut and Yang Tai Chi but he just needed to understand those systems better on a deeper level beyond just doing forms. In 2004, Sifu joined the Chan Family Choy Lee Fut  lineage and trained there until 2009.  Sifu Frank and his wife spent 5 hard years in this organization. The training was very difficult and old school yet extremely beneficial and detailed. Their understanding of the Choy Lee Fut and Shaolin legacy was heightened. 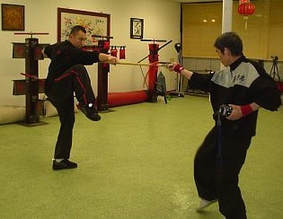 Starting our own Kung Fu school was the best thing to happen to Sifu Frank and his family. He could now do things his way. The best lesson Sifu Frank learned was to not be in big organizations and to stay true to himself.  Three Treasures will also be thankful to the Chan Family Choy Lee Fut organization for their outstanding knowledge of the system and for accepting us. Even though we are not in their organization, we recognize Grandmaster Chen Yong Fa as the Keeper of the Choy Lee Fut system.

We are proud to have some of the most authentic lineages in Chinese martial arts in San Diego.  Nobody can dispute that the source of our knowledge is  come from the top instructors of their particular style. Uniquely, Sifu Frank has trained in the 3 remaining styles in the  world that still has blood descendants. Collectively, our staff has benefited from Sifu Frank's fusion of knowledge and they will easily pass up Sifu Frank in skill which is exactly what he wants.

What do these authentic lineages mean to you?

Absolutely nothing. At the end of the day, the student is the  one who puts in the work and dedication. We should never ride the coat tails of others no matter how good past masters were. 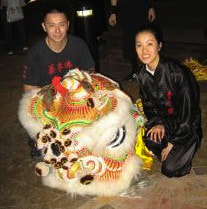 Sifu and Simo at Sycuan Casino 2006
Even though martial arts has blanketed most of Sifu Frank's life since 1990, he is quite accomplished in other areas. He was an accomplished baseball and tennis player in middle school then transitioned to badminton and basketball in high school. After high school, he was a walk-on badminton coach at his alma mater Mission Bay High School for 13 years. He then coached at Serra High and retired in 2010 to focus 100% of his attention on building Three Treasures. In 2017, Sifu Frank came out of retirement to be the assistant badminton coach at Scripps Ranch. In all, Sifu has coached over 50 champions and won CIF in 2003 while finishing 2nd in 2007 and 2009.

From 2001 after leaving White Dragon, Sifu Frank embarked on a new identity as a financial services representative and then Financial Advisor until stopping in 2009 to start Three Treasures. During this time span, Sifu also worked part time at the YMCA of San Diego in various positions. First as a Personal Trainer teaching Tai Chi and later promoted to Community Relations Coordinator and worked in the sports department. His time at the YMCA and as a Financial Advisor laid the foundation for  business model for Three Treasures.

On his free time, Sifu Frank loves spending time with his two kids and wife. He is also an avid music collector, citing YouTube as one of the best inventions ever. He enjoys rediscovering songs from his youth and exploring hits from different decades. He loves Chinese music and karaokes as much as he can but only in private as he cannot sing worth a lick. When not teaching Kung Fu or training or being with his family, Sifu plays competitive basketball and loves to read about history, Chinese medicine, and improving his Chinese.

Sifu is 100% in love with his life choices and grateful to his personal family and Kung Fu students. Sifu's desire to do things with the best interest of others in mind has paid of in so many ways. He has created many meaningful jobs; helped a lot of children; and maintained the quality and purity of the martial arts.  Sifu stands tall everyday knowing he has avoided taking the easy road and stood by his morals.